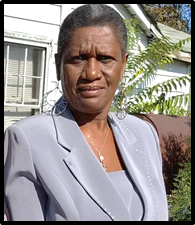 Please share a memory of Odessa to include in a keepsake book for family and friends.
View Tribute Book

Early Tuesday morning, January 19, 2021, Odessa Clarke Marshall passed into eternal peace. God looked down on 5600 Charlevoix Court in Richmond, VA and said, “My child, take my hand and follow me.” Odessa said “Yes sir.” Now she rests along beside her mother (Annie Pearl Clarke), her father (Henry Lee Clarke), her brother (Lawrence Edward Clarke) and her husband (Fulton Lewis Marshall) who all preceded her in death.
Odessa was born in Nottoway County Virginia on November 30, 1957. She is the youngest of six children. Her surviving siblings are: her sister, Joyce Clarke, who lives in Richmond, VA; her brother, James ‘Leroy’ Clarke (Rosalind), who lives in Chesterfield, VA; her brother, William Clarke, who lives in Blackstone, VA and her sister, Velma Rhodes (James), who lives in Blackstone, VA. She attended Nottoway High School.
In August 1976 Odessa married Fulton ‘Lewis’ Marshall. To this marriage one daughter (Michelle) was born. Odessa remained married to Lewis until his death. She later gave birth to two more girls (Kim and Deidre). Rutherford Vaughan is the father of Kim and Deidre.
Odessa’s surviving daughters are: Michelle Marshall who lives in Atlanta, Georgia, Kim Marshall and Deidre Marshall who both live in Blackstone, VA. Her three grandchildren are: LaQuasia Marshall, AQel Taylor and Cedric Marshall. In addition, Odessa is survived by two aunts, Lois Moore who live in Petersburg, VA and Elizabeth Davis (Norman) who lives in Dinwiddie, VA; three uncles, Nathaniel Pritchett, of Victoria Va, Curtis Pritchett (Geneva) who lives in Shiloh, TN and James Pritchett who lives in Columbus, Georgia. Odessa is also survived by a host of Nieces, Nephews and cousins along with two devoted friends, Beverly Fitzgerald and Mary Maddux.

Zoom in at 3pm on January 28, 2021 for Virtual Funeral Service. Click Link

Look inside to read what others have shared
Family and friends are coming together online to create a special keepsake. Every memory left on the online obituary will be automatically included in this book.
View Tribute Book
Share Your Memory of
Odessa
Upload Your Memory View All Memories
Be the first to upload a memory!
Share A Memory
Plant a Tree