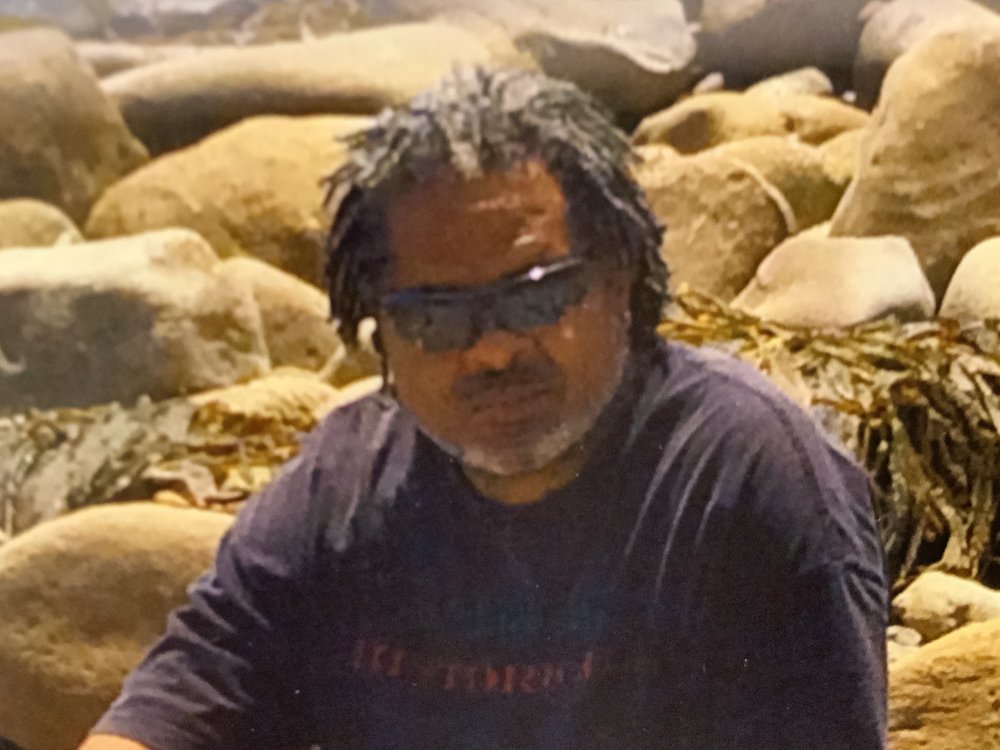 Please share a memory of Alex to include in a keepsake book for family and friends.
View Tribute Book
Alex L. James, 52 of Amelia Courthouse, Va passed away on Wednesday March 4, 2020 at St. Mary’s Hospital. Alex was a lover of life and seeker of peace and wisdom who prided himself on lifelong learning as well as sharing knowledge about his heritage, the Black Experience and history. Alex was a natural educator and sports enthusiast, which fueled his passion for coaching and mentoring young people, which he did for many years in Amelia. Alex was born in Columbus, Ohio to parents Ernest L. James and Evelyne D. James. Alex attended St. Charles Preparatory High School and the Ohio State University. As a boy, he could always be spotted with a basketball or football under his arm- he played small forward and quarterback in his two favorite sports. He was a popular kid who loved biking around town with cousins and friends, tinkering with bikes and caring for stray animals. Alex was a protective and caring big brother who helped his shy little sister make friends. Alex was quick witted and good in school, which won him a scholarship to Ohio State Unversity to study finance and banking. After the birth of his son, Alex joined the United States Marine Corps where he served for over a year. After his honorable discharge, Alex returned to Columbus before moving to California to pursue music and live with his father. Alex spent the next decade working at a number of tech startups by day while pursuing his passion for the arts and entertainment in Los Angles and working for Conscious Comedy Concepts Inc. In 2005, Alex relocated to Virginia to aid in the care of his ailing mother where he met Christina and fell in love with his children Kayla and TJ. He was an enthusiastic sports dad who could always be found cheering for Kayla and Tj in various sports. Alex had a tremendous green thumb, and planted a half-acre of vegetables annually to eat and share with loved ones. Alex’s family is heartbroken by his sudden departure, but grateful for the years they had with him and the memories they’ll always cherish of their beloved father, brother, cousin, and uncle. They appreciate your respect for their privacy during this extremely difficult time. Alex is preceded in death by his father, Ernest L. James; his mother, Evelyne D. James; and sister, Ramona James. Alex is survived by his children, Alex L. James II, Kayla Elliott and Thomas Elliott Jr; his wife Christina Elliott James; Stepmother, Terry McAlister-James; Siblings, Guy James, Yolanda James, Angela Wilson (Carroll), Rael Nelson James, Vincent James; Grandson, DeAndre Malik Weatherly; a host of aunts, uncles, cousins, nieces, nephews, and friends. The family wishes to recognize other cherished friends Lori Brown Esq., Patrick Brown, Kevin Stinson, Della Bradley, Albert Archer and Tony Robinson.
To plant a beautiful memorial tree in memory of Alex James, please visit our Tree Store
Saturday
14
March

Look inside to read what others have shared
Family and friends are coming together online to create a special keepsake. Every memory left on the online obituary will be automatically included in this book.
View Tribute Book
Share Your Memory of
Alex
Upload Your Memory View All Memories
Be the first to upload a memory!
Share A Memory
Plant a Tree