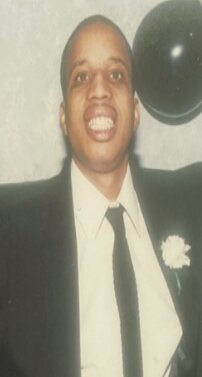 Please share a memory of Samuel to include in a keepsake book for family and friends.
View Tribute Book

During the early morning of September 7, 2022, God dispatched His angels to the bedside of Samuel Alexander Mitchell and whispered to him, Well Done, I have prepared a place for you.

“Sammy” was born August 22, 1966, in Petersburg, Virginia.  He attended Amelia County Public School and The National Children’s Center, Washington, DC where he participated in the special Olympics.  He won gold and silver medals for competing in relay and 100-meter races.  He also received an achievement award for the 1985-1986 school year.

Sammy was baptized at an early age at the Branches Runn Baptist Church.  He resided at the Carson House Group Home, Dinwiddie, Virginia.

He was preceded in death by his father, Alexander T. Mitchell.

To plant a beautiful memorial tree in memory of Samuel Mitchell, please visit our Tree Store

A Memorial Tree was planted for Samuel
We are deeply sorry for your loss ~ the staff at V.Y. Scott Funeral Home
Join in honoring their life - plant a memorial tree
Online Memory & Photo Sharing Event
Online Event
About this Event

Look inside to read what others have shared
Family and friends are coming together online to create a special keepsake. Every memory left on the online obituary will be automatically included in this book.
View Tribute Book
Services for Samuel Mitchell
There are no events scheduled. You can still show your support by planting a tree in memory of Samuel Mitchell.
Plant a tree in memory of Samuel
Share Your Memory of
Samuel
Upload Your Memory View All Memories
Be the first to upload a memory!
Share A Memory
Plant a Tree